Vue vs React: Which One Should You Use?

This article will compare the two JavaScript frameworks👀 Vue and React and help you decide which is better. 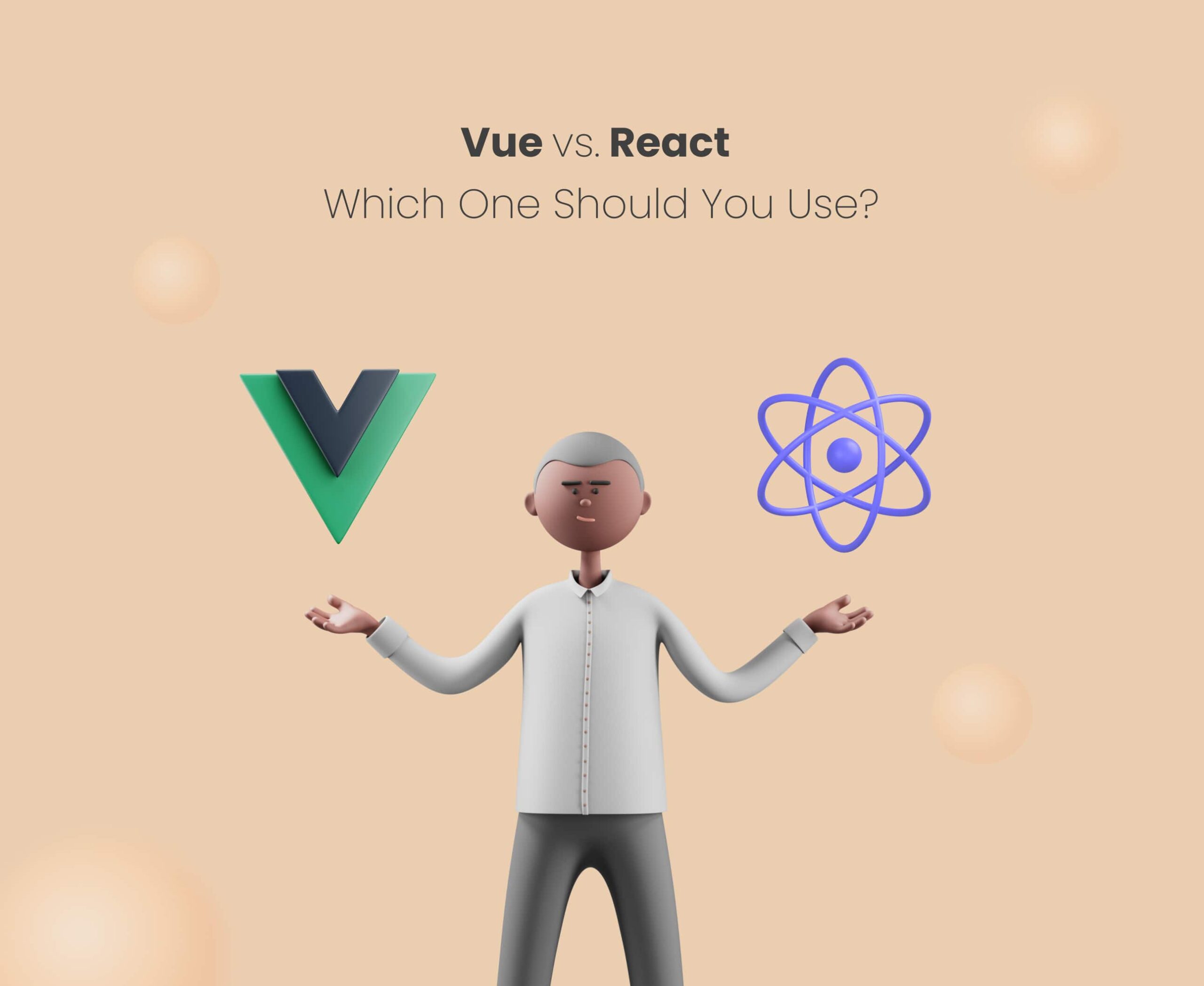 Using a framework to construct web apps depends on your needs, budget, and other development criteria. Although both technologies provide developers with a practical method for creating various Web applications, each has its optimal use cases and caters to numerous business requirements. The popularity of VueJS, a JavaScript toolkit for building dynamic web apps, has increased significantly, and both big and small enterprises are using it to build numerous projects. Whereas opting for React development can be an excellent decision for designing single-page web apps such as UI, React is more adaptable because it is a library rather than a framework.

This JavaScript framework allows developers to create UIs (User Interfaces) and SPAs (Single-page Applications). As a result of the Options API, which helps beginners to learn more quickly, this framework is famous for its short learning curve. This is one of its defining characteristics. As a way to take the most promising parts of Angular and build a custom tool around it, Evan You created vue.js, which he made at Google working on some exciting and experimental projects centered on interaction. In Vue3, the latest version, TypeScript support has been improved, along with the composition API, global mounting/configuration API changes, and other features. It is also more lightweight and faster than previous versions.

React is a JavaScript library that is open source and used to create user interfaces. It is a component-based frontend library that is only in charge of the application’s view layer, which is represented by the letter ‘V’ in MVC. A React app is composed of numerous components, each of which is responsible for rendering a small, reusable piece of HTML. Nested components can be used to develop large applications from simple building elements.

Parallels between Vue and React

Vue.js and React have many similarities.

Before we get into the differences, it is vital to know that they share some essential traits:

In addition to a wealth of libraries and tools, React and Vue each have vibrant communities. They are also free and open source. React, on the other hand, keeps the advantage.

The two libraries share this characteristic in a significant way. The Virtual DOM in JavaScript is primarily a DOM tree representation. Every HTML element is a JavaScript object in this HTML DOM abstraction. This strategy boosts efficiency while also allowing for more declarative DOM manipulation.

Having a component-based architecture and exposing lifecycle methods, both are lightweight. Their performances are so identical that it is unnecessary to explain the distinctions. On the other hand, Vue renders data more quickly and is lighter than React.

Other Common features are

Differences between Vue and React

All the JavaScript frameworks can be studied and understood, but Vue is the easiest. Learning takes anything from a few hours to under a week. All that is needed is a fundamental grasp of how ES6 functions and some familiarity with JavaScript.  Since Vue’s documentation is not as vast as other frameworks, it is easy to understand.

React is easy to learn for someone with prior experience using JavaScript. The reduced learning curve makes it easier to build a team because any beginner or experienced developer can participate. Only the releases that came after 16.0 are up-to-date. As a result, newbie developers could find executing the more intricate functionality challenging.

With each new option or component added, the status of the Vue application becomes less explicit, making it challenging for the app to load more quickly. Fortunately, a virtual DOM is included in this framework to improve application speed. Lazy loading is one of Vue’s most significant features. It contributes to a faster load time.

A React app runs faster, has a more authentic customer experience, and has separate components that work well together. React’s component-based architecture helps to create more robust single-page apps, while reusability lowers the complexity of the code and eliminates DOM interaction to speed up page loading. The library focuses on making necessary website changes without reloading the entire page. It, therefore, updates the content.

React won this competition. Given that Facebook supports this technology, its increased popularity and community are unsurprising. Although Vue has a smaller community with fewer resources and modules, Evan You and the team continue supporting it.

React needs third-party libraries, whereas Vue is a standalone framework. React depends on other systems like Flux/Redux for routing and state management. These frameworks simplify debugging by giving users a single method for changing the state. The ecosystem has grown more fragmented due to Facebook granting users control over react-redux and react-router.

Fewer libraries are compatible with Vue. However, several React-required functionalities, such as props validation, are presently available in Vue. The Vue team maintains and supports key frameworks such as Vuex and Vue-router.

The extensive libraries of components in Vue and React make it simpler to reuse code, boost developer productivity, and speed up the development process while creating component-based user interfaces.

Since 2016, React has made a third-party CLI tool called create-react-app available to help programmers with activities like app development, scripting, and other related tasks. Before, React developers had two options: copy files from older projects or start from scratch. Although it didn’t take long, it was a laborious process.

On the other hand, Vue includes a tool called Vue CLI that enables quick project creation. The flexibility to install plugins at any project stage and ease of customization are just two benefits of Vue CLI.

Vue and React have security issues, albeit Vue apps are marginally simpler to secure than React-based ones. Vue developers can clear HTML code before implementing it or use additional libraries to help prevent attacks, even though automatic defenses against XSS flaws are not accessible. In situations where you are confident that the HTML is secure, you can immediately build web pages while securing the applications both before and after production.

React security relies on the programmer adhering to security guidelines to protect against XSS flaws, SQL injections, and other risks. React is easy to use, but it takes a lot of knowledge and experience to ensure that React projects are secure.

ReactJS includes a number of practical test runners that simplify following the development process. Testers may execute test suites according to a standard procedure thanks to test runners like Jest, Mocha, and many others. This makes it easier for them to find bugs in actual browser configurations, unnecessary functions, and places where excessive function manipulation takes place. It expedites application deployment, reduces time to market, and promotes a more productive environment.

Vue is relatively new. The testing capabilities are conventional, easy to use, and efficient. It does not put the ability to test the code at risk and does not offer excessive tools. Two of the libraries that are officially suggested are Vue Testing Library and Vue Test Utils. This architecture allows for hot reloading, CI/CD, and the establishment of faster feedback mechanisms.

The most prominent social networking site, Facebook, consistently supports React. The main benefit is that React is constantly being developed and improved by a dedicated team at Facebook. Vue is not, however, supported by a significant company. This is not to imply that it lacks public support or is unpopular. This is because the Vue community is smaller than the React community.

Where is Vue used

The popularity of Vue is rising exponentially, and many leading companies are using it for their projects, such as Adobe, Alibaba, GitLab, WizzAir, Netflix, and even NASA. One of the few JavaScript frameworks available today that has attained this degree of widespread usage is Vue. In addition, the community for this robust framework has expanded as more developers opt to learn how to code with it.

Where is ReactJS used

Some companies that use React for their projects include Facebook, Instagram, WhatsApp, PayPal, Yahoo, Khan Academy, and, yes, Barack Obama’s website. It is undeniable that React has cemented its position as the go-to technology for rapidly crafting efficient web apps.

Selecting the Perfect One

JavaScript frameworks do not have a universal design. Both React and Vue provide developers with exceptional possibilities in their unique ways. The developer must take the web app’s functionality and the aspects that are most crucial to its success.

Similar products like Vue and React offer libraries and frameworks to developers so they may create dynamic, quick-loading user experiences. On the other hand, Vue is a bit simpler than React, making it easier for beginner programmers to master. React, on the other hand, has a more challenging learning curve and needs more practice to become fully proficient. Despite this, programmers consider it a versatile tool with greater flexibility than Vue.

Assume that making reusable components is your main objective. If so, you should presumably use React since it has JSX support, simplifying developing unique features. Moreover, React already has a significant community supporting it. We hope this comparison and explanation help you understand how to use each in your projects and which one should be used in which situations. Contact us to know more about what technology can be the right choice for your million-dollar idea.