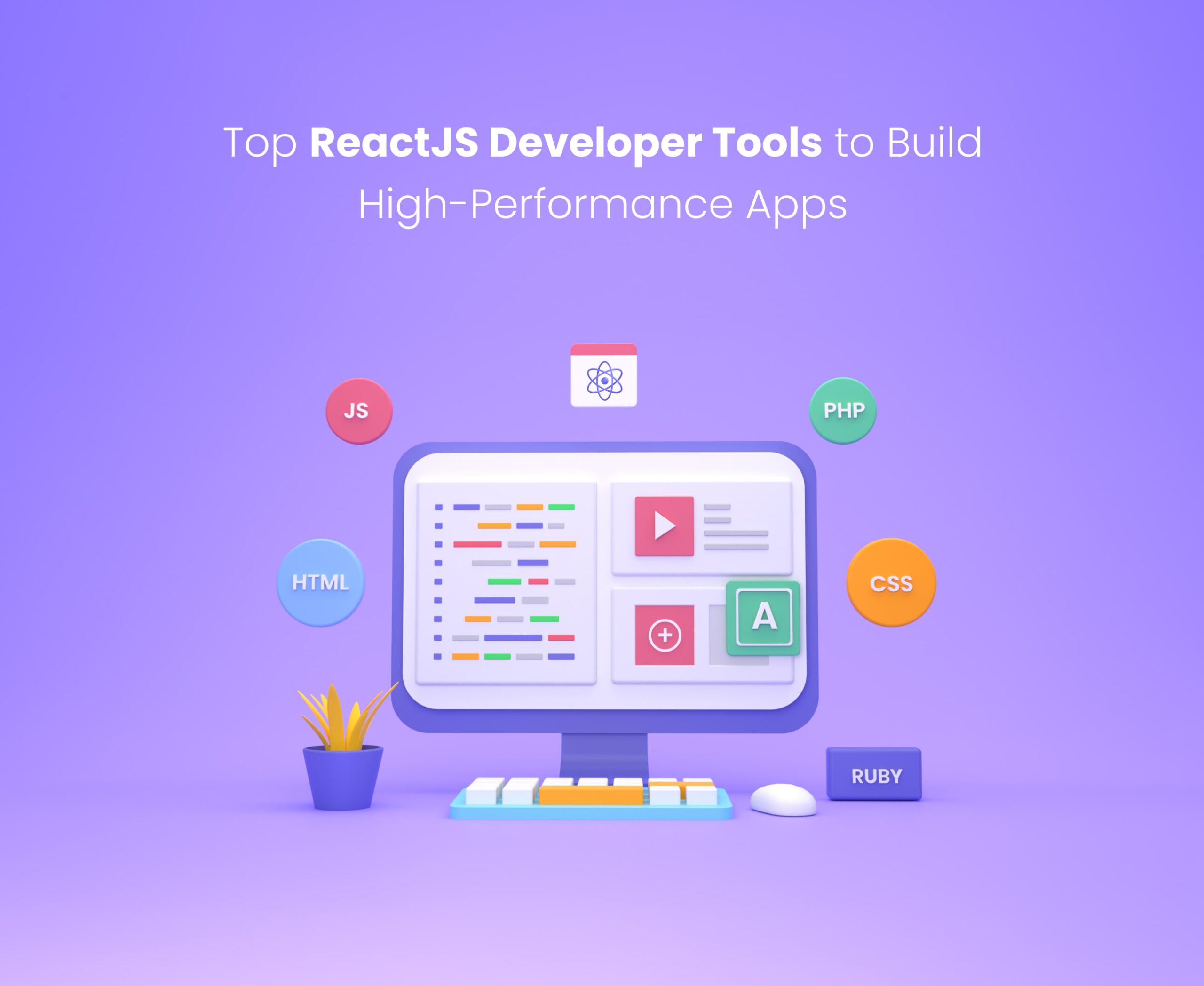 React was first introduced in May 2013; Facebook developed it. It is an open-source library for front-end web development. It lets you build rich user interfaces and also allows you to build mobile apps using React Native.

1. It has a straightforward structure.

Compared to other front-end frameworks or libraries, React is straightforward, with a well-defined lifecycle and a component-based approach. It employs a distinct syntax known as JSX, which allows it to use both JavaScript and HTML.

It enables developers to reuse code components from different levels while working on the project.

3. The flow of Data in Only One Direction

Data goes in just one direction with React JS, which is downloaded. The advantage is that the smaller data does not influence the bigger data, allowing for quick and painless modifications. The object’s state is updated and changed, and more and more businesses and startups are considering React for this reason.

React Developer Tools What Are They?

The extensions, libraries, frameworks, code generators, and debuggers that make up the React developer tools are tools designed to make the React development process easier. When creating, maintaining, testing, and releasing apps and user interfaces (UIs) completed in the React ecosystem, such React component design tools are crucial for a company.

Businesses hire Reactjs developers because they may benefit from cleaner, easier-to-maintain, and reliable codes free of any bloating or redundancies with these React developer tools, which yield instant benefits.

In this article, we’ve compiled a thorough list of the top ReactJS development tools to aid programmers in creating stunning applications with unbeatable speed.

It is one of the most popular and significant React web tools for debugging with Profiler. It is an open-source React JS package that analyses the React tree, including its hierarchy of components, states, props, and more. This tool also allows you to watch how members interact and how the debugging process works.

The utility has complete React Hooks support, allowing developers to access React’s functionality without creating a class. It assists them in being aware of the nested hierarchies through various methodical filtration methods. It also has interaction tracking, reading source code, theming, terminal access (CLI), and other capabilities.

Create React App is a straightforward environment for new single-page React apps. Using this environment, developers may use the most recent JavaScript capabilities, optimize the application for production, and have a pleasant development experience.

Create React App does not handle backend logic or databases. It just gives instructions for creating the front end; thus, it may be used with any backend. Babel and webpack are present and perform their work, so you don’t need to know anything about them and can concentrate on coding.

The most well-known IDE specifically designed for React web development is Reactide. React’s independence from the platform is one of its main advantages. You can load components without configuring or building them because the browser has a built-in server and simulator. It provides pre-configured modules that don’t need human setup or outside construction tools. When a single React JSX file is accessed, the cross-platform desktop application Reactide automatically renders the React project in the browser, streamlining the workflow. To reduce your reliance on the server settings or built-in tools, Reactide has an integrated node server, a simulator, and other features. Reactide offers visual editing capabilities with its live depiction of the project architecture. Thanks to the GUI features, receiving input from the browser simulation is now simpler than ever.

It is an open-source framework that debuted a few years after React and used the concept of a data “store” to assist keep track of the application’s state. Although React allows you to transmit state data across components, doing so efficiently may be difficult, especially in larger applications. All Redux components have direct access to the same stores, making it simple to transfer states between application sections.

Using Redux to design simple apps may result in unnecessary complexity. If your store doesn’t have much state data to monitor, the work necessary to build up a Redux infrastructure may exceed any benefits you gain from using it. However, the framework is beneficial if developers use Redux for more complex projects. Redux’s small library size is another enticing aspect, making it a tiny yet powerful library.

Storybook is a popular ReactJS UI tool that functions as a playground and an IDE for generating, developing, and testing UI components. This React dev tools plugin combines basic components to create rich and interactive UIs that focus on business logic by decoupling the architecture.

All distinct components that may live as a separate unit and generate value are kept as storybooks within the sandbox. Each story accurately depicts the circumstances of each component, allowing for simple comparison and contrast. The primary purpose of this React developer tool is to generate a series of stories that capture the behavior of the components and orchestrate a meaningful narrative through rapid iteration. As a result, it is one of the many critical React JS developer talents in great demand.

Regarding development tools, Bit is one of the most popular. Bit allows you to create and distribute React components easily.

Without diving into too much detail, Bit provides a CLI tool and an online platform for publishing and distributing your React components (once they’ve been isolated by Bit). It also lets you search for third-party components created and released. Consider it a hybrid of NPM and Git for React Components.

In a nutshell, Bit’s third-party marketplace allows you to search for components made by others. You may even modify the component and see a preview with Bit. This will enable you to compare several components and choose the best fit for your project.

A collection of testing tools is required for each project. React Testing Tool is a simple yet helpful library that allows you to test your React code easily. The library extends the capability of the DOM Testing Library, on which it is built.

Excellent documentation and examples will help you get up and running quickly.

This tool is a one-size-fits-all approach for building reusable components. React Cosmos focuses on improving all elements of React development, no matter how tiny or huge. It analyses components and lets you render them with any context, props, state, or whatever else you desire. It connects to operating instances to allow viewing of changes in applications over time.

Surface dependencies may be used to improve the component design with React Cosmos. All you need to do is describe your sensible component inputs to improve debugging and UI predictability. In addition, it enables you to create UI component libraries and React components.

Evergreen is one of the many JavaScript frameworks that is free and open-source with no predetermined setup. Consequently, users can build new systems that incorporate the design requirements. This structure is completely managed through the building and maintenance of portions.

It is also compatible with React since it has polished React components that give users complete control when needed. Whether in the preceding or present decade, the applications had to appear decent. Evergreen’s React components are built on top of the React User Interface Primitive to achieve infinite composability. Evergreen has its UI design language for online applications.

It can be used to create unit tests for React apps, allowing developers to validate parts of code simultaneously. Jest tests are performed from the command line. The testing framework makes it simple for developers to construct mocks — a useful method to keep tests minimal and run them without relying on other portions of the software.

The program also allows developers to take “snapshots” of their component tree and compare the predicted result to the actual test result to detect any unexpected changes in the data.

As the name implies, this React prototype tool allows developers to construct an application architecture from scratch using a visual method. It helps the development cycle by providing all the application files needed at each stage and mapping the process into a graphic design form.

Developers may then utilize drag-and-drop functionality in React development tools like React Proto to change the states and props rather than writing lines of code.

So that’s about it. We have curated a list of tools that can be used for various purposes be it testing or enhancing UI. These tools help to make your job efficient and when used wisely according to your project requirements work as a wonder. The right tools minimize the developers’ efforts and save time and money. Contact us for your ReactJS project and our React engineers will make your vision shape.