Number of Mobile App Growth and Usages Statistics for 2023

Global mobile app sales reached $318 billion in 2020, according to Statista.📊But what does this mean for the future? Find out the stats! 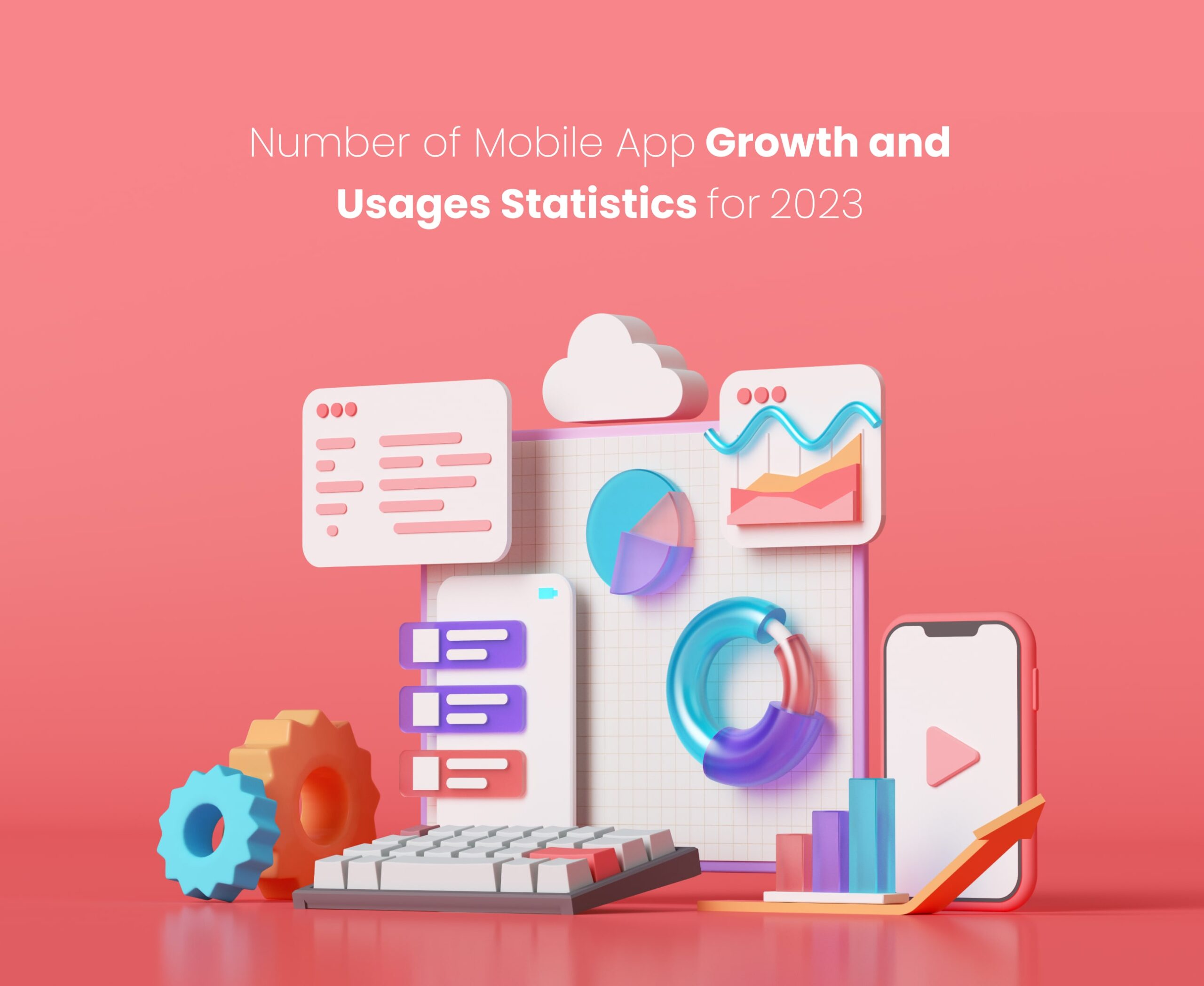 The use of smartphones and other mobile devices is increasing enormously. These days, folks routinely check their phones, sometimes for no obvious reason, and are continuously in contact with smartphones. Especially in this post-pandemic scenario, where businesses are still making up for the losses they sustained in 2020. They are transitioning to digital, mobile-first, cloud-based, cross-platform solutions. Multinational organizations are operating remotely and maintaining their business operations capacity.

Technology leaders are striving to develop mobile technologies in this fast-expanding digital-first era. And taking a mobile-first approach to digital product development will undoubtedly provide businesses with a lot more chances to succeed in a cutthroat industry.

Why Does Mobile Development Have To Be Involved?

What Are the Most Downloaded App Categories?

What Are the Factors That Affect the Growth of Mobile Apps?

It is not surprising that the mobile app market is booming. There are 5.22 billion unique mobile phone users worldwide (DataReportal, 2021). The penetration of smartphones and apps is still rising steadily and does not appear to be slowing down anytime soon.

Companies should consider switching their services to mobile-first software solutions, especially in today’s world where users prefer mobile devices to the conventional system. We can anticipate the breakthroughs that the quickly changing mobility trends in IT will bring in the remaining months of 2022, in the following year 2023, and beyond.

Why Does Mobile Development Have To Be Involved?

Mobile app development has experienced a huge upswing due to the rising demand for mobility solutions and the ability to have everything at your fingertips. Especially, when right now there are many cross-platform frameworks like Flutter, React Native, Ionic and many more that help with the development of a full-fledged app. The facts on demand and innovation in the mobile app market are listed below.

What Are the Most Downloaded App Categories?

With a utilization reach of 91% and 88%, respectively, chat apps and social media apps were the most widely used app categories as of the third quarter of 2020.

Of all the mobile apps in the Apple App Store, the most popular category for developers is gaming apps. Nearly 25% of all mobile apps fall into the games category. That’s two times more than the second-highest category, business. If you’re looking to launch a new gaming app, be prepared for some tough competition—but also be prepared to ride the wave of a massively booming industry!

As of the third quarter of 2021, consumer spending on apps was 21.5 billion dollars, making the Apple app store the world leader in terms of app revenues. Revenue from mobile apps is expected to reach over 613 billion dollars by 2025.

The amount spent on mobile advertising is projected to record 327.1 billion US dollars globally in 2022. According to the most recent figures, spending would reach around 399.6 billion by 2024, an increase of 17.2 percent from the previous year.

Through the Google Play Store, Coin Master produced nearly 48 million dollars in worldwide sales in September 2022. TikTok came in second with approximately 40.6 million dollars, and Candy Crush Saga came in third with almost 39 million dollars in global Android user revenue. In the measured month, gaming apps made up the majority of the top-grossing apps.

The number of app downloads is expected to rise along with the continually rising number of mobile phone users worldwide. There are around 3.5 million apps on the Google Play Store and 2.2 million on the Apple App Store as of the first quarter of 2021. However, there hasn’t been a matching rise in retention rates. At the start of 2020, the global app retention rate 30 days after the install was 6.83 percent; however, by March of that same year, it had fallen to 6.28 percent.

Your monetization strategy should be one of the first considerations when developing a mobile app. That is the primary motivation behind your app development, correct? To gain profit. You might have considered imposing fees for app downloads. But if you charge for it, will people still download your app? Let’s compare the quantity of free and premium app downloads. Global downloads are almost exclusively free. In actuality, free apps generate 98% of all app revenue worldwide. Only a small percentage of consumers are prepared to pay for downloads.

It’s important to have the idea of releasing a paid app in mind. Both approaches offer advantages, depending on the kind of app you have. Less mobile users will download the app if you charge for downloads at first. This is because most individuals are accustomed to receiving free downloads. Just have a peek at your smartphone. Do you have any installed applications that you paid for? If you do, you’re not the majority. Paid app users, however, are more likely to be active users. They won’t spend money on something they won’t ever enjoy.

But you may still make money with your app without charging for downloads. If you run an existing company and have an app as an extension of it, you should surely be giving out downloads for free to attract more customers. No one expects users to pay for downloads. Since the vast majority of apps that are sold in the Apple App Store and Google Play Store are free.

What Are the Factors That Affect the Growth of Mobile Apps?

You already know that the user bases for the Android and iOS platforms are counted most recently by region due to their high rates of user base retention. Therefore, it’s crucial to make a sensible choice when developing your app.

The success of your mobile apps is increasingly dependent on how well the UI/UX of those apps is designed for mobile devices.

Any mobile application must operate as quickly and error-free as possible to be successful. Mobile app users want apps that regularly provide new updates, offer a positive app user experience, and cater to all of their demands in today’s fast-paced environment.