In this article, we’ll show you what makes Flutter the best choice for MVP development.✔ 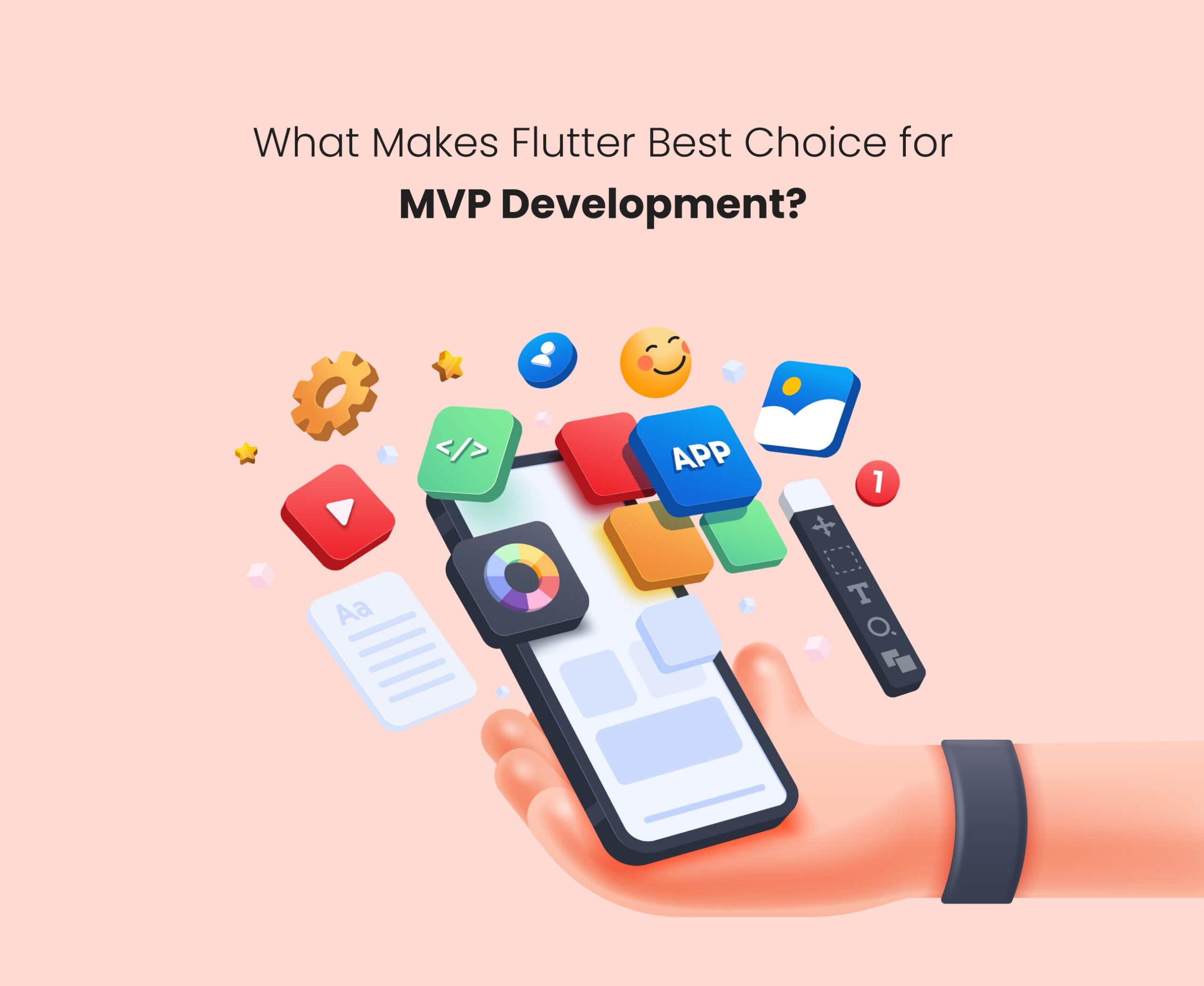 A Minimum Viable Product (MVP) is a product with the bare minimum functionality that aims to assess a product idea’s worth. The concept of an MVP is well-known in the field of mobile apps as a way to validate a product idea. It involves providing selected users with a simple version of the app.

Then after these beta testers provide insightful feedback to improve MVPs, they also help develop better products. This way, MVPs save time and money. A flutter is a popular tool for creating MVPs for apps. We’ll figure out what makes this combination excellent for companies looking to do preliminary testing before launching a full-fledged app. We’ll go into great detail on what entrepreneurs should consider to hire Flutter app developers and how MVP is a first step to starting their mobile adventure.

Before we explore them together, let’s first examine the significance of the MVP development process for the app industry.

Why Is Developing an MVP Important?

In the app market, MVPs are widely used, particularly by entrepreneurs trying to test their ideas in the marketplace. An MVP’s basic premise is straightforward. Create a version of your app that highlights its unique factors, then distribute it to potential users to see how they react. The next step is to modify the app based on users’ feedback.

The qualities of an MVP are matched with several advantages. Let’s examine the most crucial ones one at a time.

Reason 1: Beginning with a Test of the Idea.

Nobody can argue with the fact that entrepreneurs love their idea and think that it is the best idea because they believe that it has a high chance of succeeding in the market. Is this conviction in the concept enough to make it a success? When that happens, MVP steps in. The purpose of an MVP is to assist you in commercializing your idea. Plus, it helps get customer feedback, conduct market research, and refine the future app. By doing this, an MVP validates an idea and saves expenses.

Developing an MVP is more affordable than making a whole app. This is because MVP development implements a set of defined core features with little effort. With the help of Flutter’s cross-platform app development process, apps are simultaneously developed for Android and iOS. Because it’s simpler and quicker, app development companies prefer to create MVPs before beginning a full-fledged app. MVPs are the essential components of the app—no frills or extras. They are considered the crucial first stage in app development.

Reason 3: Helps to Bring in Investment

It’s challenging to interest investors in your app idea. However, addressing them with a functional model helps to get a foot in the door. Compared to when you only give them an idea or a graphical presentation, there is a higher possibility that they will become uninterested. You need to show them an MVP supported by user engagement data to make them hooked on your app.

The Role Of Flutter In App Development

Flutter was released in 2018 by google, and it has become a ground-breaking platform for developing apps. According to Statista, Flutter has taken the top spot among app development frameworks. You need to learn the Dart programming language to use it, and if you have a background in Java or C language, it helps to master this framework. With Flutter, you can create desktop, online, and mobile apps. Companies like Google Ads, Groupon, Alibaba, and Tencent favor it because of its strength and adaptability.

Many developers prefer to use Flutter to create an MVP because of its cutting-edge features. Among these factors are the following:

A Reduction in Coding

The Flutter SDK uses Dart, an object-oriented programming language noted for having fewer lines of code than other languages currently on the market.

This functionality makes it incredibly simple and quick to make changes to the app code because they are immediately accessible to developers on their screens. Moreover, thanks to this capability, they can quickly update anything that doesn’t fit inside the app.

These appear native to Android and iOS separately and offer customization options in the widgets package.

When you want to show yourself in the market with your ideas rapidly, you must figure out whom to target as your audience. Using Flutter, you can avoid the difficult decision-making process and expand your user and client base for polling. With Flutter, developers can leverage the single code base to build the same app for iOS and Android users.  In this manner, you can reach your targeted audience on both platforms without extra effort.

After examining the best features that both MVP and Flutter offer to developers and the app industry world, let’s move on to the segment where we’ll explore how their pairing benefits entrepreneurs and start-ups. These advantages can be incorporated when you design an MVP with Flutter.

What Makes Flutter a Smart Choice for MVP Development?

Flutter facilitates MVP development as an open-source, feature-rich, cross-platform app development framework. With shorter hours, it simplifies and speeds up the development process. Besides this, Flutter works with Firebase and provides many benefits for MVP development.

Google is famous for its adaptable user interfaces that improve the user experience. It also gives Flutter accessibility to this experience. The flexibility and scalability of Flutter make it a great choice for MVP app development. By using the platform, developers now create feature-rich, flexible user interfaces with ease.

The built-in widgets for material design make it simple to develop eye-catching MVPs. The development of an excellent MVP using Flutter is also made possible by Cupertino and the default animations. Developers can change and customize MVPs significantly thanks to the comprehensive customization tools.

Developers who use Flutter for MVP development can drastically shorten the turnaround time. With Flutter, team collaboration can be improved. To improve the quality of the MVP, developers, quality assurance, and designers can swiftly work together. Developers can quickly and effortlessly correct errors and add new features thanks to the hot reload capability.

The cost is a significant concern for new users in the mobile app market. With Flutter, as above mentioned, development efforts get reduced. You can create user-friendly apps quickly and affordably, as it is a cross-platform app development platform. You can make apps for both iOS and Android using the same codebase. Costs are significantly reduced when using a single codebase across two platforms.

Since the platform has a low learning curve, beginners can pick it up quickly. Firebase and Flutter are integrated. This implies that server-side programming is not necessary for Flutter developers. The time to market is shortened when an MVP is created with Flutter. Further, integrating Firebase into your app adds many capabilities, including cloud storage, crash reporting, cloud functions, real-time databases, hosting, authentication, analytics, etc.

Having a big budget refers to expensive native app development.  However, there is a risk that most of the framework would sacrifice performance if you are on a strict budget and want to build hybrid apps, which will harm the app’s user experience. Flutter-built applications are renowned for their performance. The produced apps operate without the influence of mediators thanks to natively built code. To give users a native experience, use Flutter to build your app’s MVP.

Attracting investors to your app idea is crucial for both companies and startups. The Flutter SDK has enhanced UI elements and interactive designs to draw investors’ and customers’ attention and keep them engaged. Flutter provides a large variety of widgets and gives developers the flexibility to alter them as needed, making it the finest platform for cross-platform app development. Additionally, Flutter enables 2D GPU-accelerated APIs, enhancing animations’ UI and UX by making them slick and appealing.

Flutter requires only a small amount of time and work to produce an MVP. Additionally, it keeps the development cost cheap, so you can have a user-friendly, robust and interactive solution with all the features you want. And to get the advantage of Flutter, we are here to help you out as the reputable provider of Flutter app development services. Contact us to hire our in-house team of skilled Flutter app developers who can incorporate recent developments in cutting-edge technologies to create enterprise-grade apps and high-quality MVPs. 🚀