Flutter 3: What is New for Developers and Owners?

Several upgrades to the Flutter framework and its core developers are presented at Google I/O 2018, both of which are wonderful reasons for Flutter app developers to celebrate. 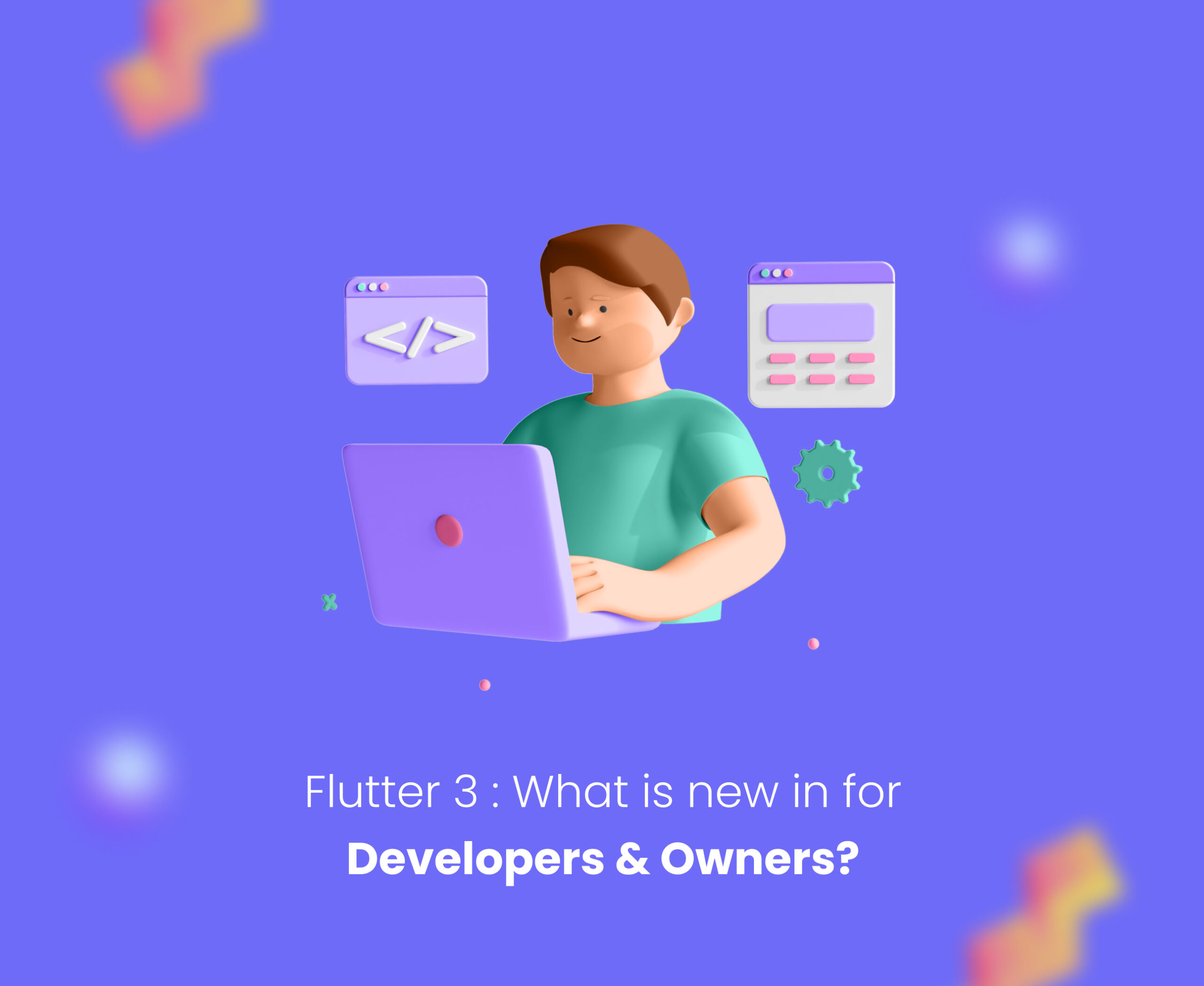 Since the announcement of Flutter by Google in 2017, the world of cross-platform has completely changed. Since then google is constantly upgrading and updating its version along with new features. With the new updates, Flutter Development is gaining more and more popular among developers.

In this article, we will explore What are the new features in Flutter 3.0 that developers and owners should know?

So, we are here with google  Google’s latest masterpiece, Flutter 3, which is the latest version of Flutter with the major update as six platform support with a single code base.

With the constant effort from google finally Flutter 3, it was announced on May 11, 2022. Flutter 3 allows developers to create attractive experiences across six platforms from a single codebase, allowing entrepreneurs to offer innovative ideas to the whole addressable market from day one

On the previous version i.e 2.0 Web, Windows iOS and Android support was only available. Now Flutter 3.0 is backed with stable support for macOS and Linux apps. The goal is to provide you the freedom to use the underlying operating system to its full potential while sharing as much UI and logic as you like.

There are many new updates to share with you in this 3.0 release, including an update to Flutter’s macOS and Linux support, substantial speed improvements, Mobile and Web enhancements, and much more! Some major updates :

When Flutter was first launched, it garnered a lot of positive feedback from the development community. Until recently, Flutter has been regarded as the most dynamic cross-platform development framework with six platform supported with the latest update.

On iOS devices with ProMotion displays and the latest iOS version, such as the iPhone 13 pro and iPad pro, Flutter 3 will enable variable refresh rates.

With the Flutter 3.0 update now, you can run apps on a 120Hz refresh rate on devices with the latest iOS version which was not available in the previous version. Allowing users for a smooth and better run time experience.

Flutter 3.0 is integrated with the foldable phone support which was not available in the previous version. In collaboration with Microsoft, new features and widgets such as DisplayFestureSubScreen, and DisplayFeatures are added allowing you to build dynamic and entertaining experiences on foldable devices.

International text input, including third-party input methods such as Sogou and Google Japanese Input, is supported on all three desktop platforms Windows, Linux, and MAC, including languages that employ text input method editors (IMEs) such as Chinese, Japanese, and Korean.

With the release of Flutter 3.0 Flutter development for windows, 7 / 8 is not recommended.

While previous versions of windows (Windows 7, Windows 8, and Windows 8.1) are not blocked from development however this version and we only provide limited testing during release as Microsoft no longer supports them.

Flutter apps running on Windows 7/8 will be supported; however, they are encouraged to upgrade.

Flutter 3.0 comes up with the new IPA command “Flutter build IPA” for the simplified launch of your iOS application.

Flutter web now automatically finds and is able to use the ImageDecoder API in browsers that support its uses such as (Chrome, Edge, Opera, Samsung Browser, and others). The new API uses the browser’s built-in image codecs to decode pictures asynchronously this will improve picture decoding by 2x.

Material 3 elements like as dynamic color, an improved color system and typography, improvements to several components, and new visual effects introduced in Android 12 such as a new touch ripple design and a stretch over-scroll effect are all supported by Flutter 3. Try material 3 and take your existing Flutter project to next level.

We have tried to summarize and offer you the most important features in Flutter 3.0 which you must know as a developer or as a business owner. We’d hope that reading our blog article has given you a complete picture of what’s new in Flutter 3.0.

Thank Flutter Team at Google for all of your hard work in helping Flutter maintain its position as the most popular cross-platform UI toolkit with regular update and upgrade.

If you want to be part of the google framework and use the most popular cross-platform UI tool kit on your next project or if you want to upgrade your project with Flutter 3.0. We are here to help you out.