Android 13 is Officially Here, Features, How to Install 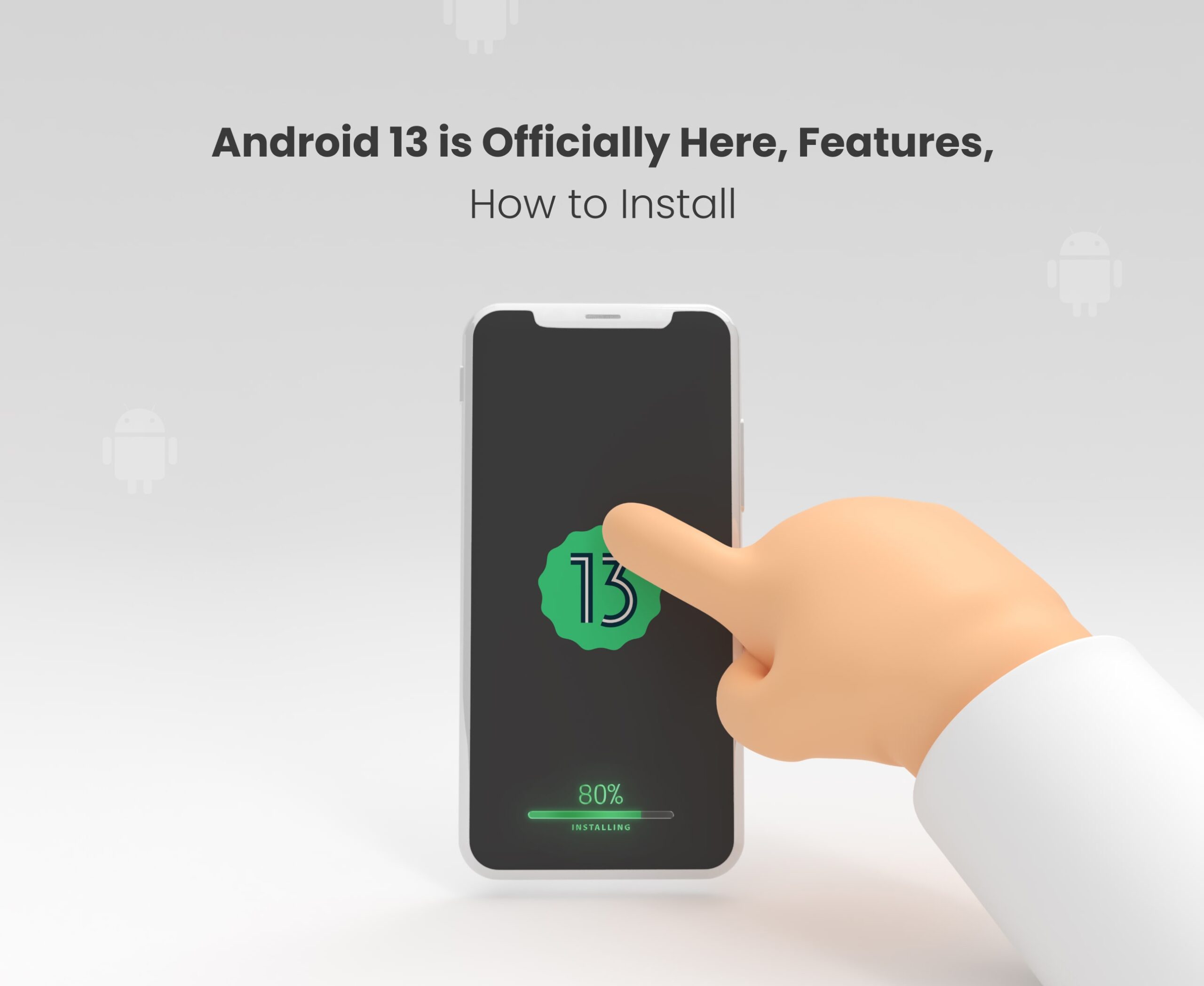 Google officially launched an update in the operating system on 15th August 2022: Android 13. Google has released many preview builds of Android 13 so that Android app developers can test their apps. Those who own the Google Pixel 4 (including those with subsequent models) should already have the update ready to install. For those who don’t have Pixel phones, the new software will be rolled out to other phones throughout the remainder of 2022. Before Android 10, Google named its operating systems after sweet delights. The version is still referred to inside as desserts, even though it has been changed to a number in the public sphere. The name for Android 13 is “Tiramisu” as revealed by the first developer preview.

So now, let’s take a closer look at the features and what’s new Android 13 has stored for us.

We are presenting this blog post with sections covering the three primary user-facing bases, including UI updates, cosmetic tweaks, and specific usability functions to assist you in navigating the features added in Android 13.

Android 13 delivers an improved appearance and feel based on Material You. Non-Google apps can be customized to match your phone’s wallpaper theme and colors, creating your home screen quite unified and distinctive to your style. On Pixel running Android 13, 16 new color extraction options are available in the wallpaper picker along with themes.

When you initially run an app after upgrading to Android 13, you may notice a subtly redesigned permissions screen with more curved edges. Further, instead of granting access to “Files and media,” you permit access to “Photos & videos” or “Music & audio,” depending on the files an app requires.

This also offers brighter and more visible buttons within the floating pop-up. The “Allow” and “Do not allow” buttons will maintain the Dynamic Color settings and system theming.

You may alter the contents of a copied item by tapping the floating panel at the bottom of the screen when you copy something on Android 13. Occasionally, relevant options will appear. The URL you copy, for example, can be opened in your browser when you copy it. If you are signed into the same Gmail account on both Android devices, you can copy anything on one and paste it on the other, eliminating the need to email yourself from phone to tablet. The clipboard history will be erased automatically (perhaps after an hour) to protect your privacy.

During playback of media in music, podcast, and certain video streaming apps, a wavy line will appear to the left of the playback head. As part of the media player redesign, this will display how much media has been played.

To the right of the playback head, a thin solid line indicates anything that has not yet been played. You can see how much of a song, podcast, or film you have completed at a glance. The lock screen and Quick Settings media player display this modification.

Control of language per application

Multilingual users will be pleased to know that you can now set several default languages for each app. To set languages for specific apps, navigate to Settings > System > Languages and enter and press on App languages.

Because the pandemic has made scanning QR codes a daily experience for many of us, having rapid access to a QR code scanner is useful. A QR code scanner powered by Google Lens is also now accessible. This allows you to run Lens and read QR codes from any screen in Android 13. Scanning is quick and allows you to open online sites, and do a variety of other things. In Android 13, pull down the notification shade and touch Edit (the pencil icon) to customize your Quick Settings tiles. You may add the QR Code Scanner to your panel by dragging it there.

Specifically, Android 13 will warn you when apps drain your battery excessively in the background. Alerts appear as silent notifications, and you can kill the app with a simple tap. Swipe away the notification instead if you want the app to keep running. Afterward, the notification shade shows an overview of apps running in the background, which stays out of the way but informs those who want to know more.

Location-tracking permission used to be required to enable an app to scan for nearby Wi-Fi devices. Since there’s now a separate Nearby Wi-Fi Devices permission option, that no longer applies. Privacy dashboard (found under Settings > Privacy > Privacy dashboard), which displays all apps that access the device’s camera, microphone, location, and other settings permissions over the past 24 hours, now shows the past week’s history as well.

In Android 13, you can dim the wallpaper and use a dark theme for Bedtime mode. When you’re about to go to bed, these screen options help you adjust to the darkness. In the middle of the night, if you wake up and check your phone, they can also help you get back to sleep.

You will feel immersed in the action with Spatial Audio’s immersive 3D sound. It is for video games and movies. Only headphones that support head tracking are compatible with this feature.

There are quite a few changes in Android 13 that make using large screens a bit more convenient. A taskbar appears at the bottom of your Android tablet or folding phone, with frequently used apps (you can hide them), quick settings and notifications, and drag-and-drop multitasking with recent apps pinned. Wear OS smartwatches will unlock tablets automatically, and audio-switching will allow you to listen to your wireless earbuds while watching a movie on your tablet. In addition to YouTube Music and Google Maps (android 13 is not required), Google has been rolling out updates to more than 20 Google apps with redesigned interfaces for larger screens.

Also, Android 13 allows tablets to recognize finger and stylus touches separately, thereby improving palm rejection when sketching or writing notes. It will be interesting to see what happens.

How to install Android 13

You may now download Android 13 if you’ve got a Google Pixel phone (Pixel 4 and Pixel 4A or later versions). Simply navigate to Settings > System > System update and select Check for update.

Other Android smartphones, including those from Samsung, Asus, HMD (Nokia phones), iQOO, Motorola, OnePlus, Oppo, Realme, Sharp, Sony, Tecno, Vivo, and Xiaomi, should receive the update later this year. If you don’t want to wait, some of these devices are eligible for the Android 13 beta program.  If your device is supported, you can join the beta program.

After signing up, you’ll be able to access the most recent beta release as an over-the-air (OTA) update but be warned: beta releases may be unreliable and glitchy. We strongly advise you to back up your Android phone before registering, as there is a genuine risk of losing your data.

These features are among the many you’ll find in Android 13, which also includes HDR video support from third-party camera apps, an updated media output switcher, and braille displays for Talkback. As well as providing a connected experience on your phone, you can also use it on tablets and laptops. We hope this gives a proper insight into what Android 13 offers and how its numerous features can greatly benefit its user base. For cross-platforms like React Native and Flutter, developers need to make adjustments to their app in terms to migrate the app to Android 13 soon and fix the minor bugs that may come with the new Android version.